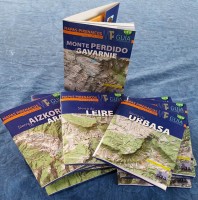 3D maps on smartphone and tablet

Miguel was born in Bayonne (France) on the 28th December 1953 to a Paraguayan father and a French Mother, and wrote his first mountain notebooks at 16.

These notebooks were published by the author, starting in 1974, before the release of « Guide des Pyrenees Basques » in 1977. He then published a number of books on trekking in the Pyrenees for Editions Elkar (San Sebastián), Lavielle (Biarritz) and Sua (Bilbao) written in four languages : French, Spanish, Basque and Catalan including 3 noteworthy volumes dedicated to the Basque country : La Montagne Basque (1982), Sites secrets (1987), then Sentiers Méconnus (1989).

After 5 years of studies of Art and Archeology at the Sorbonne University, he graduated with a Capes in Arts and taught at the Cité Scolaire d’Orzy in Revin (Ardennes), then at the Collège Pfeffel in Colmar (Haut Rhin) and finally at the Collège François Truffaut in Saint Martin de Seignanx (Landes) from 1984 to 2016

1999 was the beginning of the Cuadernos Pirenaicos or Cahiers Pyrénéens (Sua, Bilbao) collection, including a guidebook and a 1 :50,000 map, with a part of the map magnified to 1 :25 000 and a large 3D panoramic view.

In 2001 he published a set of large panoramic vistas, produced in 3D, of the great mountain ranges of the Iberian Peninsular and the Alps.

Between 1992 and 2002 he published the 6 volumes of « Pyrénées 1000 Ascensions », illustrated with hundreds of photos and very detailed maps of all the great mountain ranges

In 2005 the maps of Cuadernos Pirenaicos are updated or redrawn to be compatible with GPS. They are also downloadable in the Compegps-TwoNav ∗ format.

2013 saw the launch of a new collection of maps 1 :25 000 with a fresh and unified design, alongside a guidebook written by Gorka Lopez.

Since 2001, he has enjoyed discovering mountainous regions across the five continents, in addition to his pyrenean activities.

One thought on “About Miguel Angulo”